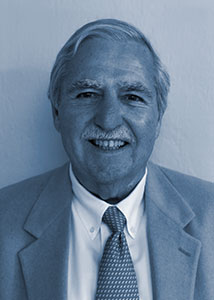 Jeffrey White began his lengthy career in healthcare management in 1967 as Assistant Personnel Director at Maine Medical Center, Portland from which he was promoted to Assistant Administrator. Thereafter, he served as Assistant Administrator and then Administrator of Regional Memorial Hospital in Brunswick, Maine. From 1974-83 White held senior management positions at Mid-Maine Medical Center, Waterville, Maine, where he was actively involved in the successful consolidation of two community hospitals. In 1983 he joined Wentworth-Douglass Hospital in Dover, New Hampshire. Subsequently, he became Executive Vice President in 1985 and President in 1989 of Frisbie Memorial Hospital in Rochester, New Hampshire. White joined Helms & Company as Senior Consultant and Principal in 1992 developing a particular interest is interim leadership.

In 2001 – 2002 White served as interim Executive Director at Hillcrest Terrace/Pearl Manor, a retirement community/assisted living facility/nursing home, located in Manchester, NH. In July 2002, he was appointed interim President/CEO of New London (NH) Hospital and served in this role through March 2003. During his tenure, a financial turnaround plan was developed and adopted by the Hospital’s Board, a multiyear management services contract with Dartmouth-Hitchcock Medical Center was agreed upon, and NLH achieved designation as a Critical Access Hospital.

In February 2006, White was appointed as interim CEO at Copley Hospital, Morrisville, VT continuing this role until January 2007 before turning over the reins to a new permanent CEO. During the period April – December 2007, he served as interim Executive Director of University Health Care (UHC), a multi-specialty, multi-site group practice associated with the University of New England College of Osteopathic Medicine in Biddeford, Maine. In May 2009, White was named as the interim President of New Hampshire Healthy Kids serving in that capacity until November 2009. White served as interim CEO at Valley Regional Hospital, Claremont, NH and Grace Cottage Hospital, Townsend, VT during January – September 2013 before becoming interim CEO at Copley Hospital once again in June 2019.

A Life Fellow of the American College of Healthcare Executives (LFACHE), White was Regent for New Hampshire from 1988-1992 and served as Chair of ACHE’s national Healthcare Consultants Committee in 2006-2008.

He has an undergraduate degree in Economics from Bowdoin College (A.B., 1966) and a Masters in Business Administration (M.B.A., 1985) from the University of New Hampshire.